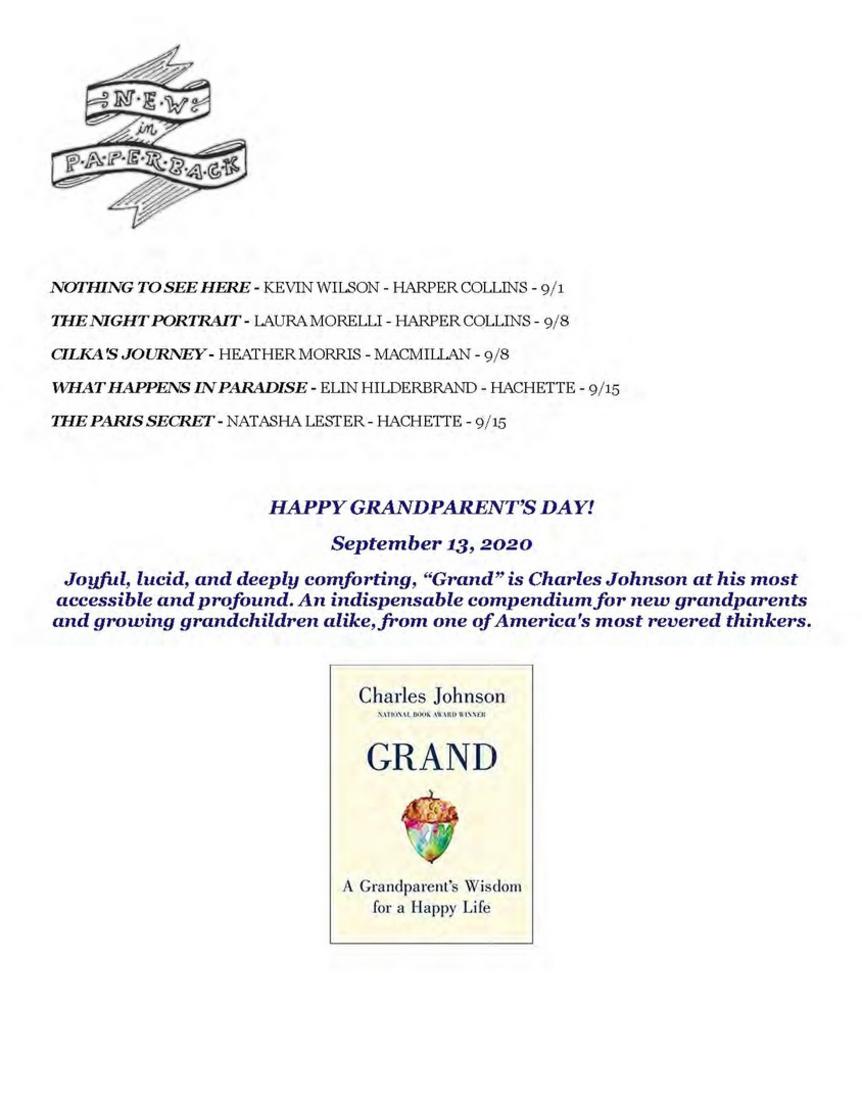 GOLDEN GIRL by Elin Hilderbrand – A Nantucket novelist has one final summer to protect her secrets while her loved ones on earth learn to live without their golden girl. (Hachette) - 6/1

THE RIDE OF HER LIFE - Elizabeth Letts - The triumphant true story of a woman who rode her horse across America in the 1950s, fulfilling her dying wish to see the Pacific Ocean. (Penguin Random House) - 6/1

MALIBU RISING - Taylor Jenkins Reid - From the bestselling author of Daisy Jones & The Six and The Seven Husbands of Evelyn Hugo . . . Four famous siblings throw an epic party to celebrate the end of the summer. But over the course of twenty-four hours, their lives will change forever. (Penguin Random House) - 6/1

THE EAGLE'S CLAW: A NOVEL OF THE BATTLE OF MIDWAY - Jeff Shaara -  In a riveting tale that picks up where To Wake the Giant left off,  best-selling author Jeff Shaara transports us to the Battle of Midway in another masterpiece of military historical fiction. (Penguin Random House) 6/1

OUR WOMAN IN MOSCOW - Beatriz Williams –The best-selling author of Her Last Flight returns with a gripping and profoundly human story of Cold War espionage and family devotion. (Harper Collins) 6/1

THE PRESIDENT'S DAUGHTER: A THRILLER - James Patterson & Bill Clinton – A thriller even more compelling than The President Is Missing. Every detail is accurate - because one of the authors is President Bill Clinton. The drama and action never stop - because the other author is James Patterson.  (Hachette) 6/7

THE DISAPPEARING ACT - Catherine Steadman – From the best-selling author of Something in the Water and Mr. Nobody comes “an unputdownable mystery about the nightmares that abound in the pursuit of Hollywood dreams” (Caroline Kepnes). (Penguin Random House) 6/8

THE MAIDENS: A NOVEL - Alex Michaelides -  From the bestselling author of The Silent Patient comes a spellbinding tale of psychological suspense, weaving together Greek mythology, murder, and obsession. (Macmillan) 6/15

BLACK ICE - Brad Thor - Bestselling author is back with his most intense thriller yet. The new Cold War is about to go hot. (Simon & Schuster) 6/20

THE SECRET KEEPER OF JAIPUR - Alka Joshi - A new novel by the author of The Henna Artist, a Reese's Book Club Pick. Lakshmi arranges for her protégé, Malik, to intern at the Jaipur Palace in this tale rich in character, atmosphere, and lavish storytelling. (Harper Collins) 6/22

THE PERSONAL LIBRARIAN - Marie Benedict - The remarkable story of J. P. Morgan’s personal librarian, Belle da Costa Greene, the Black-American woman who was forced to hide her true identity and pass as White to leave a lasting legacy that enriched our nation.  (Penguin Random House) 6/29